Volume Six is the 6th volume of The World God Only Knows.

Haqua once again comes to Keima's house to play with Elsie. As she is not there, Haqua takes her leave but bumps into her buddy, Yukie Marui. Interested in who Haqua's buddy is, Keima watches at how her buddy works, but doesn't learn anything new. Keima's next target is the young Junior High student Minami Ikoma, a girl who doesn't know what to do with her future. After capturing her with the help of the Senpai-Kouhai relationship, Keima is asked to tutor Ayumi, Chihiro, Kanon and Elsie. There after, Elsie goes back to Hell for a visit. 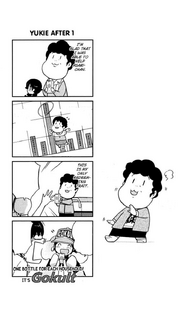 In the first panel, after saving Asari, Yukie thinks about how she was called "the Gokult Delivery Master". She sees that this is her only redeeming trait. Yukie then sells one Gokult to a girl, and that girl, who is Elsie, asks if Keima knows about Gokult. "One bottle for each household! It's Gokult!" In the next panel, Yukie recommends Haqua to have some Gokult for the sake of her health. Even though Haqua does not wish to, she tries the drink out. But is disappoint in the results as they did not make her breasts grow bigger, which Yukie is confused about. "One bottle for beauty! It's Gokult!"

In the last panel, Yukie is thinking about the Gokult business and that she may want to hand it down to her "daughter" Haqua in the future. During a meal, Yukie asks why Haqua hasn't learned to use chopsticks. Haqua replies that she is quite old already, older than Yukie. "One bottle for relationships! It's Gokult!" 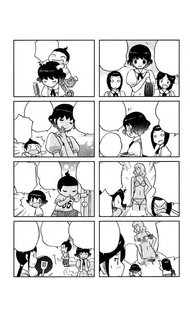 In the first panel, Minami's friends (Akko and Saito) asked if she's going to join swimming team in high school which she confirm. Then Saito teases her by telling that she heard high school swimming members wear bikini while the senior has only stickers to cover the important bits. Minami then freak out after hearing that, but Akko then tell Saito to stop. In the next panel, Minami were think that she's going to be a high school student soon so she need to stop argues with her brother, while her brother annoyed her. She then compliments to her brother that he so energetic, which makes he very surprises but he immediately response that she acts like she already grown up which his sister replied instantly too. The duo's conversation eventually interrupted by her mother.

In the third panel, Minami were thinking about her messy hair, then Saito and Akko make 3 suggestions for her, But Minami then realised that they are just making fun of her which she want to cut ties with those two when she gets to high school. In the last panel said to her friend that she gonna live with her hair for the rest of her life, but then she re-think what she said then she stated that she gonna find a man with hair-style like her. Her friends then teased her again, which annoyed her, while Keima's hair can be seen in the background.