Volume Three is the 3rd volume of The World God Only Knows.

Keima Katsuragi, known as the Capturing God for his ability to conquer any dating sim, must now use his gaming skills to capture real girls or lose his head! For his next capture Keima must face a samurai girl who has trouble communicating with her feminine side. And as if that wasn't enough, when one of Elsie's fellow demons shows up, things get even more complicated for not even demons are immune to escaped spirits. This volume covers the Kusunoki Kasuga and Haqua arcs and establishes Haqua as a recurring character. 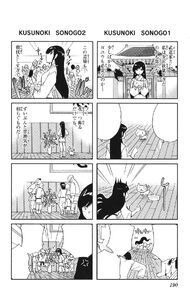 In the first 4-koma, Kusunoki wishes to make the dojo much more compassionate, therefore she let's a kitty stay in the dojo. But that kitty pees on the floor and Kusunoki cleans it right away. Everyone else in the dojo though thinks that Kusunoki is a diligent martial artist by cleaning the floor. In the second 4-koma, Kusunoki thinks the dojo is too savage, therefore she puts a flower stand inside. But the others misunderstands and thinks that the flowers are for an opponent Kusunoki had defeated and killed.

In the third 4-koma, the kitty brings home a girlfriend. Kusunoki looks happily at the two kitties playing until the two starts to make out. Seeing this, Kusunoki splashes herself with water to cool down. the others, again misunderstanding, thinks that she is purifying herself. In the last 4-koma, Kusunoki feels her heart race when she sees a soft-cream display. While she wonders what this feeling is, the men from the dojo happens to pass by. Thinking that she is has bowel movement, they look away to allow her to take care of "business". Feeling disgusted and embarrassed, Kusunoki beats them up. 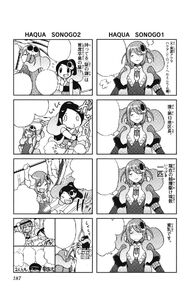 In the first 4-koma, Haqua is shown that she's not at the best, being a former Valedictorian Devil and only having one spirit captured. but she only replies nicely with "...I intend to become number one.!!" But the last statement, flat-chested, does bother her a bit...In the second 4-koma, Elsie wishes to hold Haqua's scythe but she doesn't let her. Seeing that Elsie is sad, Haqua says she will 'give' her the scythe. Elsie charges forward towards Haqua in excitement, but Haqua 'raises' the scythe above her head. Again Elsie looks depressed and this cycle goes on and on (In Japanese, 'to give' and 'to raise (up)" can be pronounced in the same way: ageru).

In the third 4-koma, Haqua is seen as excellent by Elsie, even saying that she was able to find Keima's house right away. But when Elsie peeks out the door, she sees houses burning and people yelling that a women barged into their house. Thus shows that Haqua has no sense of direction. In the last 4-koma, we see that Haqua is testing her dimensional project out. In her own interest, she commands the doll Keima to cling onto the doll Haqua. When she does it a little, she blushes and tells the command was a lie.