The World God Only Knows Wiki
Register
Don't have an account?
Sign In
Advertisement
in: Hell Characters, Demons, Hell

Spirits (駆け魂, Kaketama; Literally meaning "Runaway Soul"), better known as Runaway spirits or Loose souls, are spectral beings that have broken free from the confines of hell. They are also referred to as Weiss by the goddesses.

It is stated by Elsie that once fully mature, they will reincarnate into the offspring of their host, thus explaining why they take refuge in the hearts of females. Haqua has also stated that most of the spirits are demons from Old Hell. In the Magi Kanon spin off, it is also revealed that some spirits are born out of human desires and unhappiness.

Spirits don't have distinctive personalities. However, according to Elsie, they all have the common goal to live again as humans. Therefore, they hide in the hearts of girls, hoping to be reincarnated as their offspring. If the spirits escape from Hell, special people are assigned to capture them: the Runaway Spirit Squad, or demons. Demons have a special sensor used to track down the escaped spirits. Only by filling the gap in the heart can they be driven away. Interestingly, some escaped spirits can affect the host by inflicting them with an ability, such as becoming invisible like in Kanon's case, or becoming large or small like in Tsukiyo's. Presumably, all spirits hate the goddesses due to them sealing the spirits to create New Hell.

In the Heart of Jupiter Arc, spirits have been shown to be able to share and know the thoughts and memories of their previous and current victims and even use it for their current victims should the need arises.

In the Magi Kanon spin-off, spirits that are born from humans' negativity tend to incorporate the negative human traits in them as well.

Runaway spirits have a very big impact on girls characteristics. For example, Kanon turns invisible every time she was depressed, Shiori has read all the books in the library, Kusunoki's femininity became solid to the point where she could be struck, Tsukiyo becoming small, Hinoki becoming a giant, and swapping the bodies of Keima and Yui.

Also, Elsie and Haqua stated the reason why the spirits would hide only in girls. It is because the Weiss will be reincarnated similar to the girl in which they hide in. Vintage has shown to resurrect the Weiss using egg-like case objects which act as incubators; whether the Weiss shown are possessing people or not, remains to be seen.

In addition, when a spirit managed to regain more of it's powers, they can also use their bodies to create things as huge as a theme park and even attack and defend. In addition, when their host dies, the spirits would still be trapped in the bodies but should another new host appear, they will be able to latch onto the new host at high speeds.

The escaped spirits have a wide range of appearances. Most spirits are shown to have no corporal forms although once they do have one, they take on monstrous and strange forms. The first spirit that has shown its particular form is large, bloated and white with a peculiar face. Yui's Weiss took the appearance of a large spider with Yui's half-naked body (which acts as an additional body for the spirit). Hinoki's Weiss looked like a gigantic titan with a face of a falcon and six arms. Strangely, although all escaped spirits are Old Devils, they have not shown their horns.

In the Heart of Jupiter Arc, a spirit can also manage to manifest itself as a ghost of Kayoko Shiratori, one of it's previous host as an emotional tether to halt Shoutaro Shiratori's actions whilst trying to completely control Urara Shiratori.

In the Magi Kanon spin-off spirits born out of humans tend to look more humanoid than their devil counterparts.

Vintage is an organization that wants to restore Old Hell and the Old Devils, members such as Fiore was even shown to attempt to kill a goddess for the sake of them. Satyr is an organization made up of select old families which, among other things, controlled Vintage for their own designs.

It has been confirmed as of chapter 170, that some Weiss and Vintage members are shown to work together. Further more, it has shown that Vintage is currently resurrecting some of the Weiss in the form of giant egg-cases.

It was also shown that the known 60,000 spirits that escaped was but a small fraction of the total number of spirits in Hell. Most of the Weiss are still trapped in Old Hell and Vintage plans to release all of them out. They seems to be on mutual terms with Vintage and it is speculated that some of them have already reached to level 4.

In the Heart of Jupiter Arc, it is shown that there are gigantic humanoids Weiss called Mobile Colossi working with members of Satyr. 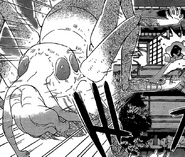 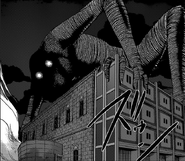 The runaway spirit boss (right) in the Magi Kanon spin-off